Not posted at time of surgery posted months later when I realized I forgot to post it!

Big Red one of our hens was laying internally. Some of you may remember some earlier posts about her
"jelly eggs". While she was in our recovery house I found out she had totally stopped laying eggs and had totally started laying internally. Which is a big problem. If a hen lays her eggs internally she will become infected and will die. So I hunted down an avian vet and started going to see him. He said as soon as most of her wounds heeled she could have surgery. He had done this surgery on many types of birds but never a chicken. I was a little worried but learning some more about his back ground, he works for the national aviary in Pittsburgh and is one of the top guys for the local Raptor Rescue, so I figured with all the animals he had treated he would do a great job.
She did finally heal enough to have the surgery. So I took her and dropped her off. What was supposed to be a 30 minute surgery turned into hours worth. She had laid alot more eggs internally than originally thought. Though she didn't have the muscle trauma which he really thought was part of the problem. The vet was awesome brought her through it great and even charged us way less than the bill would have been. But the bill was still pretty expensive. He said she was the worst case he had ever done surgery on and that he had never seen a distention like that in a living bird. So she was very lucky.

She came home with us that day on pain meds & antibiotics. She wouldn't take the liquid antibiotics that he gave me and it took us 3 doses the first day to get a whole dose into her. The next day I took pictures to send the vet via email to show how great she was doing when I noticed she had pulled out a bunch o stitches. So of course back to the vet. He put in some internal stitches and glued it good were she had pulled it apart. He is only in 3 days a week so I could not see him till the following Tuesday (4 days later). Of course by the time we got home, even though she was half sedated she pulled out the stitches above and below the internal stitches. Luckily he said the holes would be ok. He also has her another injection of Antibiotics so that we wouldn't have to fight with her.

After that we did run back and fourth the 2 hour drive a couple times but luckily it has been smooth sailing. She is doing very well and being very spoiled. I was feeding her Organic raspberries, organic blueberries, organic strawberries, organic grapes, and organic greens with a sprinkle of sunflower seeds every morning. She was loving it. but with the cost I had to slow down after she healed and got all her strength back. But her recover has been pretty fast and she is ready to go. I am just afraid to put her back with the chickens because of the whole getting a new pecking order thing. Mabon, the other hen that lived through being attacked by the raccoon still hasn't made friends with the top of the pecking line again. So she gets picked on alot. I am not really sure how to stop this. I have been thinking about pulling Gaea (Top Hen) out so that Mabon can settle in and so Gaea will have to climb her way back up the pecking order ladder. I am also a little worried about the roosters being frisky with her after all her internal issues. So Big Red is still living on our back porch. Hopefully the inflammation she does still have will go down a little more by mid December so I can reintroduce her to the group.


Please if you have any questions about internal laying please ask and I will do my best to answer them or ask my Avian vet. My vet was nice enough to email me the pictures of her surgery so I though I would post them. For some they may be a little gross so beware. 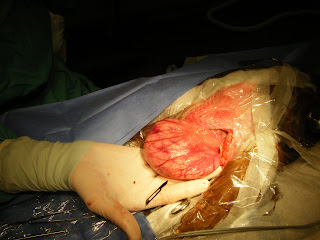 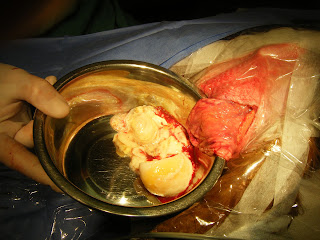 We had two chicks hatch this year. Jasmine and Stewie. Jasmine is a small feather footed black Cochin and Stewie, my best guess, is Ivy's egg and Titans Son.... maybe.. I don't know what that makes him. But they both have been released with the other chickens and are doing good. 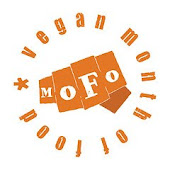 Number of animals killed in the world by the meat, dairy and egg industries, since you opened this webpage. This does not include the billions of fish and other aquatic animals killed annually.

Based on 2007 statistics from the Food and Agriculture Organization of the United Nations' Global Livestock Production and Health Atlas.

View my page on VegHaven.org

This is a Flickr badge showing public photos and videos from Veggie4life55@aol.com. Make your own badge here. 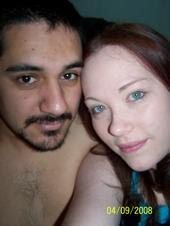 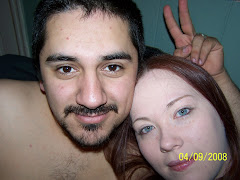 
Makeing Funny faces while he drives to Mo-Town 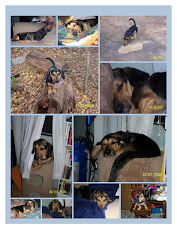 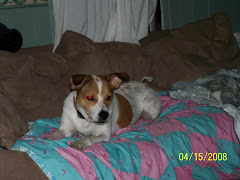 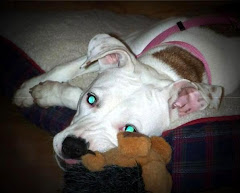 She loves to help me bake! Vegan all the way Baby! She also loves to taste test... 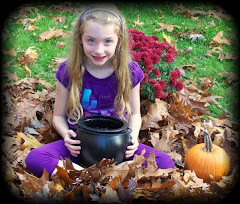 One of the pics I took last fall 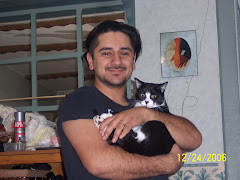 Can you tell he kinda has a fav kitty? 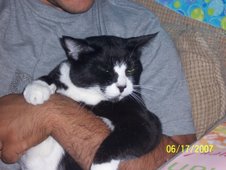 This is our baby girl who loves to eat weird objects and cost use lots of money. She is also a Miss Priss who thinks she is always right and you are wrong. Her claws & teeth will def let you know. 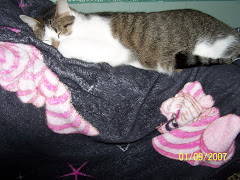 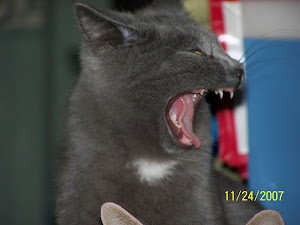 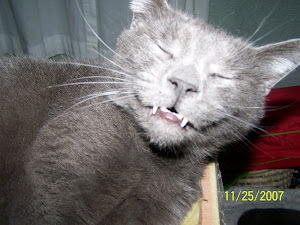 Look at that SMILE! 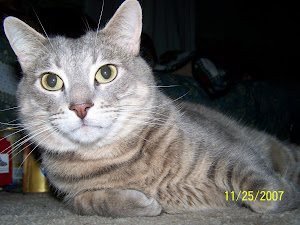 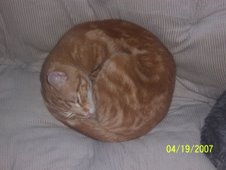 Pennies used to be Copper... Or maybe Copper was a penny...!

Sade past away the end of January. We miss u baby.

Recently past away.. We miss him dearly 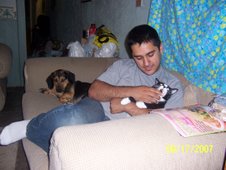 John loves to pick on everyone.... 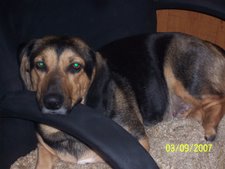 The best WAL-MART find ever :)

Chloe is the sweetest pup you will ever meet. Well atleast to me. She is really protective of me though. Anyways.

Chloe was found at a local Walmart when I lived in town about 2 years ago. She was young somewhere between 6 and 8 months old. She was skinny, dirty, and very scarred. She had been dodging cars all morning and no one had tried to help her. I petted her on my way in and desided if she was still there when I came out that I would take her home with me. When I came out she was there in a shopping cart. some one else had picked her up and sat her in there to keep her out and traffic and was trying o find someone to take her home. I called my husband ans oked it and brought her home. She was a good girl from the start. Never tryed to hurt the 3 cats we had and always stayed right beside me. Now she is a 33 pound lump that loves to play, sleep, and beg me for table scraps. She is the biggest baby. She sleeps with us everynight and even makes me carry here to bed half the time. In the morning when my husband gets up she always stays in bed with me. She also never stays alone in the house. When we go out she goes to my parents house to be "babysat". We love her so much. 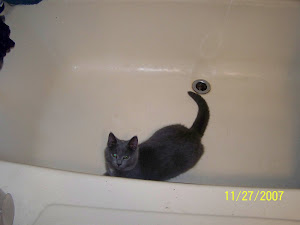 Playing in the Bath tub... 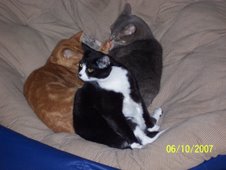 3 cats in one place all at once... Its hard to catch that one on film. Atleast in my house. 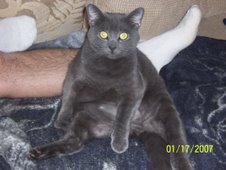 This is Dewys fav pose. 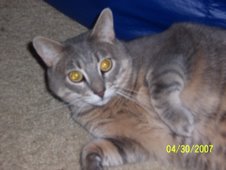 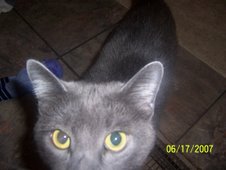 Beltane (and Romeo trying to sleep) 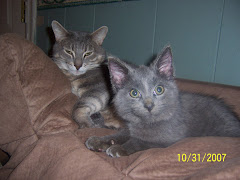 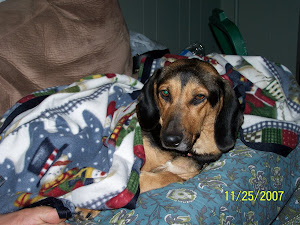 She is always under the covers ! I mean always....


The Newest Newbi to our house 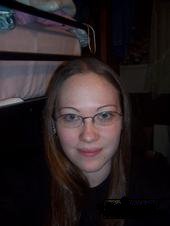 Chasity
West Virginia, United States
I am 27 and happily married and have been for almost 10 years. I live in a small, out of the way town in WV where veganism is unheard of. I have been a vegetarian on and off since I was 14. But for the last few years have been working on veganism. My Husband, John, is also a Vegetarian. I don’t have any human kids yet but I do have some animals that share my life. 3 Dogs: Chloe, Sophie, & Roxie; 7 cats: Storm, Dewy, Copper, Beltane, Moejo & Seven & Marley man; and 8 Chickens Isis, Gaia (Spayed), Mabon, Ivy, Big Red (Spayed), Jasmin, Titan, & Stewy. We also have many Babies that have passed but are still very much loved and still in our hearts; Cats: Romeo & Phoenix; Ferrets: Sade, Abu & Spanx; Chinchillas: Dusty and Schnookies; Chickens: Lil Banti, Crownos, Prince Charming, Splash, and Cinderella...